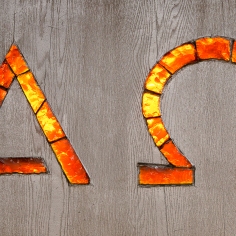 Alpha and Omega Signs in glass.

This post will conclude the three-part series on solving Revelation’s math problem.  In the first article, I described the problem caused by the geographical location of the book of Revelation in the bible. I explained how its position as the last book of the New Testament had posed a problem for Christians of today.

The book seems to defy the general flow of the gospel of Salvation by Grace through faith in the death and resurrection of Jesus Christ of Nazareth, the only begotten son of God.  The Gospel of Grace, Love, forgiveness, joy, peace, gentleness, patience which makes Christians very comfortable seems to disappear in the book of Revelation and is replaced by themes of the Antichrist, Judgement, Plagues, Beasts, Trumpets, the Beast, a Dragon with ten horns and the whore of Babylon!
These themes make Christians squirm and feel very uncomfortable, so instead of dealing with it, we have found it convenient to develop reasons and theories as to why it does not apply to us.

Convenient Reasons to not read the book of Revelation taught in the church today.

One of the reasons Christians do not study the book is the doctrine of ‘rapture’  of the Church to heaven before the period of the Antichrist tribulations and plagues described in the seals, trumpets begin to happen and only those that are ‘left behind’ are going to go through those turbulent and apocalyptic scenes.  Hence the popular ‘left behind series by Tim Lahaye.
The second reason I have heard is the tribulation is going to occur far far away in the future that we do not need to be bothered by it at the moment.  This concept is called Futurism.
Another reason is that the Antichrist came many years ago during the intertestamental period in the person of one Antiochus Epiphanes and he came to desecrate the temple of God in the past and did so many bad things, so we do not have to deal with him now.  This concept is called Preterism.

When these concepts are put side by side with scripture, we can learn that these are not true.  People craftily developed these concepts and introduced them into the church to keep believers from asking questions and finding the real truth about God’s revealed truth to His end-time church.
But God being so good, he reveals His truths to his children. ‘Surely the the Lord God does nothing until He reveals His secrets and plans to his servants the prophets (Amos 3:7). It is a Revelation by Grace, Praise God alone!!
Jesus warned of false prophets that had entered the church disguised in sheep clothing but inwardly are as ravening wolves (Matt 7:15).  Paul also warned that we were not fighting against flesh and blood but against the rulers, against the authorities, against the powers of this world’s darkness, against the spiritual forces of evil in the heavenly realms.  Therefore we should take upon ourselves the full armor of God (Eph 6:12).  Paul explained that the armor of God included the belt of truth (which is the word of God from John 17:17) and the sword of the spirit (which the bible).  Why did Paul warn us to defend ourselves with the Word of God two times?  Because it is that critical!
Many false prophets (wild and hungry wolves) have entered the church and have attacked the scriptures with interpretations that are not biblical, and since we do not study our bibles, we have followed like sheep led to the slaughter.
The word of the Lord brings light and against the immutable Word of God, all these men-concocted theories about the end time fades away.

The words Alpha and Omega concept and theme written in vintage wooden letterpress type on a grunge background. 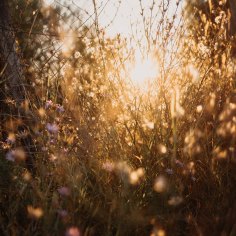 Through the inspiration of the holy spirit and Bible prophecy, we know that all Christians are going to be here on earth to experience the Antichrist and go through all the tribulation period and see all the plagues.
However, the ‘wise’ remnant followers of God who are counted worthy will be protected and not suffer like those ‘foolish’ Christians who fall away and do not follow God faithfully and are deceived by the Antichrist.
These deceived Christians will receive the mark of the Beast and worship the image of the Beast.
Hence the verse; He that dwelleth in the secret place of the most High shall abide under the shadow of the Almighty, I will say to the LORD, “You are my refuge and fortress, my God, in whom I trust (Ps 91:1).  Even though I walk through the valley of the shadow of death, I will fear no evil for thou art with me (Ps 23:4).  Though a thousand may fall at your side, and ten thousand at your right hand, no harm will come near you. You will only see it with your eyes and witness the punishment of the wicked(Ps 91:7).
God’s promises his divine protection for all His ‘wise’ faithful followers in the time of tribulation and the last plagues.  The story of Shadrach, Meschack, and Abednego cast into the furnace for refusing to bow down to the Image of Nebuchadnezzar (who later became a Beast) were protected by a fourth person (God) comes to mind.  Also, the story of Daniel thrown in Lion’s den should not be forgotten. They typify the situation of believers in the end time.

“Inspectors: this was a special requested remake of previous photo of mine. It was requested for wider space and more clouds on the side. I’ve also darkened some of the edges to add more effect.Jesus walks on clouds, showing nail holes in arms…some visible noise.”

Jesus second coming In the clouds

Therefore I am calling on my fellow Christians to wake up from our slumber and the lies that have caused us to sleep thinking we will not go through the tribulation. These lies only make us drop our guard and soften our faith.  In 2009, inhabitants of a small town in South America were told by their authorities not to worry about a dormant, inactive volcano.  Even though experts warned that it could erupt, city authorities calmed them not to be bothered by false alarms.  A few people left town but many who followed their leaders stayed, and when the volcano erupted it buried and killed almost 2,000 inhabitants that ignored the warnings to flee the city.

The same situation faces many Christians today who believe in the unbiblical doctrine of ‘rapture,’ and that there will be no tribulation for the Church.  Many will not be able to stand when the tribulation comes and will be forced to take the easy way out by taking the Mark of the Beast because they did not prepare adequately.  But those who will study the revealed prophecies concerning the second coming of Christ will be prepared and heed all the warnings and preparations so they will be able to stand and not be deceived by the Antichrist’s message and doctrines.

Many truths revealed in the book of Revelation can not all be discussed here in this article but will do in my other posts.  God bless all those who read and understand this message.  The message to take from these series of posts is that the book of Revelation applies to all of us Christians and the need to study and understand every word of it. ‘Heaven and earth will pass away, but my words will not pass away’ (Matt 23:35).   ‘For truly, I say to you, until heaven and earth pass away, not an iota, not a dot, will pass from the Law until all is accomplished’ (Matt 5:18).